Physician Interpretation of Cardiac Standstill on US

Point of Care Ultrasound (POCUS) has gained wider use in resuscitation of patients presenting with cardiac arrest. POCUS can play an important role in determining the etiology of arrest as well as being used to determine the presence or absence of mechanical activity. The REASON study demonstrated that patients with PEA or asystole without cardiac activity on POCUS are extremely unlikely to survive to hospital discharge though this study did not investigate the more important question of a survival with a good neurologic outcome. (Gaspari 2016). In light of this as well as other evidence, some have proposed that the absence of cardiac activity may be adequate to declare resuscitation futility and stop resuscitative efforts. However, there is a lack of agreement on what defines cardiac activity (see table 1). Due to this, and other factors, the level of agreement between physicians in interpretation of cardiac standstill is unknown.

How much variability exists in the interpretation of cardiac standstill on POCUS amongst physicians?

Primary: Variability in interpretation of cardiac standstill among respondents
Secondary: Variability among subgroups based on specialty, training level and self-described POCUS experience

Cross-Sectional convenience sample survey
Participants were shown 15, 6-second deidentified ultrasound clips of patients with pulseless arrest and given up to 20 seconds to answer whether the clip demonstrated cardiac standstill or not. 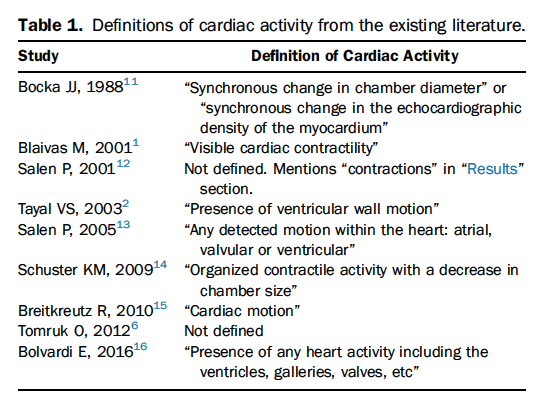 Krippendorff’s alpha = assessment of interrater reliability among physicians, similar to Fleiss’s kappa but thought to be more reliable in situations with missing data points

“According to the results of our study, there appears to be considerable variability in interpretation of cardiac standstill among physician sonographers. Consensus definitions of cardiac activity and standstill would improve the quality of cardiac arrest ultrasonographic research and standardize the use of this technology at the bedside.”

We agree with the authors that this study, though limited by it’s methodology and convenience sample, demonstrates significant disagreement between providers as to the interpretation of cardiac standstill on POCUS.

This study cannot be used to impact clinical practice but should cause some pause for thought for providers who are currently using POCUS in cardiac arrest as part of their protocol for termination based on cardiac standstill.

The use of POCUS to declare death and stop resuscitation is predicated on a clear ability to establish the presence of cardiac standstill. The low level of agreement of providers likely reflects the absence of a single definition of standstill as well as calls for increased training and assessment. A unified definition of standstill would be extremely helpful not only in future research but in cardiac arrest care as well.