Safety of PE Treatment with Rivaroxaban

The simplified PE Severity Index (sPESI) is one of several validated prognostic tools for acute pulmonary embolism (PE).  The European Society of Cardiology recommended the use of the sPESI to risk-stratify patients with acute PE into low risk (sPESI=0) and non-low risk (sPESI≥1) in order to guide treatment and disposition (Konstantinides 2014).  Systematic reviews and meta-analyses have found that outpatient management of low-risk PE patients with standard therapy is safe, effective, and cost-effective (Aujesky 2011, Zondag 2013, Kahler 2015).

Standard practice in the United States for treatment of acute PE over the last decade has been a parenteral agent (e.g. enoxaparin, fondaparinux) overlapping with a vitamin K antagonist (VKA) (e.g. warfarin). However, a paradigm shift has been brewing over recent years.  Direct oral anticoagulants  (DOACs) have demonstrated efficacy as initial and long-term treatment of PE compared to standard therapy in various trials (EINSTEIN-PE 2012, RE-COVER 2014, AMPLIFY 2013, Hosukai-VTE 2013).  The EINSTEIN-PE study found that rivaroxaban was noninferior to enoxaparin/VKA for the treatment of recurrent venous thromboembolism (VTE) without increased risk of bleeding.  Rivaroxaban and other DOACs are approved for treatment of VTE in the European Union, but use in the United States of DOACs for ED treatment of PE is more limited.

What is the safety and efficacy of rivaroxaban in patients with a range of sPESI scores in comparison to standard treatment with enoxaparin/VKA?

Patients with symptomatic PE with or without DVT. sPESI scores were assigned to 4,831 out of 4,832 patients from the original EINSTEIN-PE study. HESTIA score was not used as it includes social factors that were not available from the data. sPESI and HESTIA scores are decision instruments that help clinicians predict short-term adverse outcomes in patients with PE.

Post hoc analysis of the original data gathered from the original EINSTEIN-PE study – an open-label, randomized, phase III study comparing rivaroxaban with enoxaparin/VKA for a 3, 6, or 12 months as treatment for acute symptomatic PE. 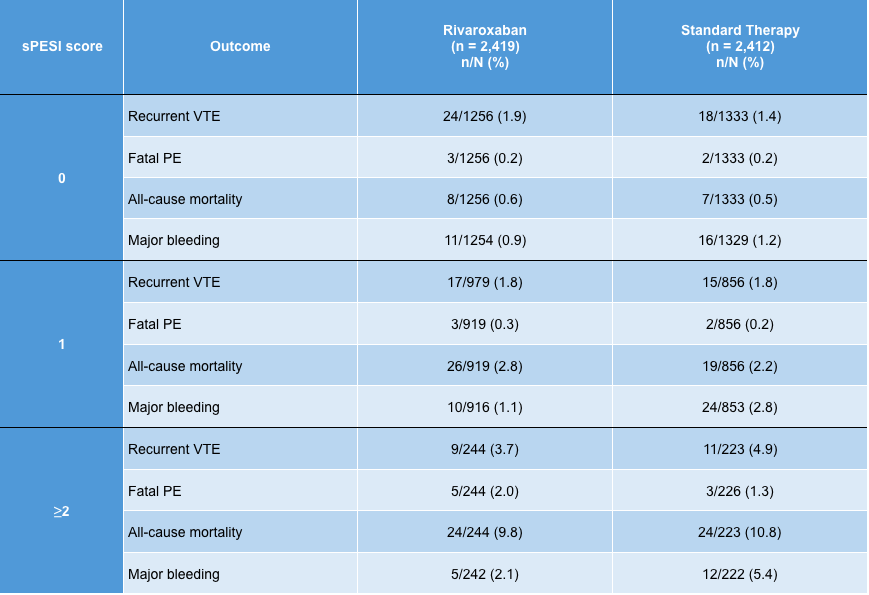 In this post hoc analysis, a higher sPESI correlated with a higher rate of adverse events, thereby corroborating previous validation studies. Furthermore, when stratified by sPESI, the safety and efficacy outcomes for patients treated with rivaroxaban versus standard therapy were similar.

DOACs are a simple, effective, safe, and cost-effective treatment for acute PE. The sPESI is a validated tool for identifying low-risk acute PEs for possible outpatient treatment. However, is it possible to combine these two concepts? Can low-risk PE patients be safely treated by initiating a DOAC in the ED and then discharging the patient to outpatient follow-up? This study provides further support towards the momentum that is already headed in that direction.

Anecdotally, this strategy is already being used by some ED providers in the United States (Beam 2015).
Of course, further evidence is needed prior to broader acceptance of such a strategy. The MERCURY-PE study was announced in 11/2016 to explore this very question. It will be a multicenter, prospective cohort study of the safety and efficacy of outpatient management of low-risk PE patients in the ED with rivaroxaban after application of the HESTIA risk stratification score.

The use of rivaroxaban in patients with PE does not appear to increase the risk of averse events in comparison to the combination of enoxaparin and a VKA.

The SGEM: SGEM #126: Take Me to the Rivaroxaban – Outpatient Treatment of VTE