Angiotensin Converting Enzyme Inhibitors (ACE-I) are prescribed to millions of patients in the US. Though they are relatively safe, upper airway angioedema is one of the life-threatening adverse effects that we see frequently in the Emergency Department. Though this disorder is routinely treated with medications for anaphylaxis (i.e. epinephrine, histamine blockers, corticosteroids) the underlying mechanism of action predicts that these medications will fail. There is no well established treatment algorithm other than airway control if the angioedema is severe and appears to be causing a mechanical obstruction and cessation of the medication. A 2015 phase 2 study published in the NEJM touted the role for Icatibant in the treatment of these patients. Despite being heralded as “the cure,” the data set in this article was small questioning the validity of the findings. Enter the CAMEO study which attempts to further elucidate the benefits of this medication.

Does the administration of icatibant to patients with ACE-I induced angioedema improve outcomes?

Patients >/= 18 years of age who were being treated with an ACE-I and presenting with ACE-I induced angioedema of the head and/or neck within 12 hours of symptom onset.

Primary: Time to meeting discharge criteria “defined as time from study drug administration to earliest time that difficulty breathing and difficulty swallowing were absent and voice change and tongue swelling were mild or absent.”
Secondary: Occurrence of airway intervention, admission to hospital, use of corticosteroids, antihistamines or epinephrine and number/proportion of subjects meeting the primary endpoint at 4, 6 and 8 hours post-drug administration. 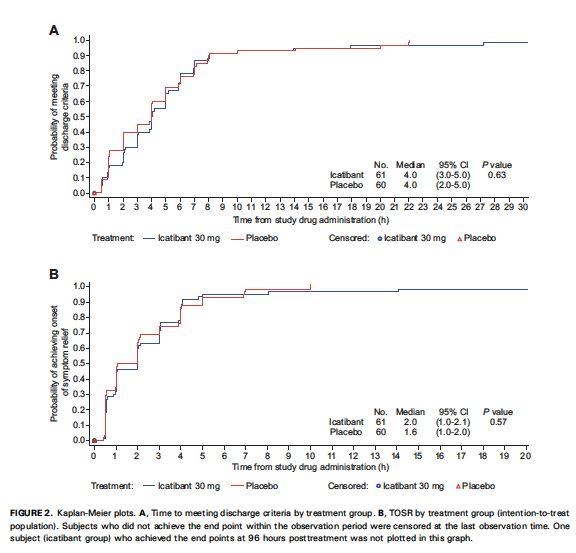 We agree with the author’s conclusions. This well done, RDCT shows no benefit to the addition of icatibant in the treatment of ACE-I-induced angioedema.

The excitement of some for the purported benefits of icatibant for this indication based on the small NEJM study was unfounded. Currently, there is no reason to add icatibant in the treatment of ACE-I induced angioedema.

ACE-I induced angioedema remains a disorder without a viable treatment modality for reduction of symptoms. For now, the primary therapeutic interventions remain the same – airway management when indicated and removal of the offending agent.

EM: RAP: The Inside Scoop on Icatibant

The SGEM: Icatibant Bites the Dust – For ACE-I Induced Angioedema