Carbon monoxide is one of the most common causes of fatal poisoning through either intentional or unintentional exposure and accounts for almost 50,000 emergency departments per year. (Sircar 2015, PMID: 26032660) It is an odorless, colorless gas that is produced from relatively common sources such as vehicle exhaust, propane fueled heaters, wood/coal burning stoves and gasoline powered generators. Carbon monoxide has an affinity for hemoglobin ~200x that of oxygen and results in the formation of carboxyhemoglobin, a form of hemoglobin that does not participate in oxygen delivery, which has been thought to cause a relative anemia and tissue hypoxia. However, more recent literature suggests that circulating CO may have a direct role in causing tissue damage. (Gozubuyuk 2017, PMID: 28752154)  Carbon monoxide poisoning manifests as a flu like illness in mild exposures (headache, dizziness, weakness, vomiting, chest pain) and more significant illness with larger exposures (loss of consciousness, arrhythmia, seizure, memory issues, movement/cerebellar issues and death).

At the time this landmark study was published in 2002, the standard of care for carbon monoxide poisoning was 100 percent normobaric oxygen through a facemask with experts often recommending hyperbaric oxygen therapy if patients had lost consciousness or had severe poisoning. Previous studies had suggested that 100% oxygen at normobaric pressure decreased the half-life of carboxyhemoglobin by 5 fold (5 hrs → 1 hr) and suggested that this was even more significant with at hyperbaric pressures (5 hrs → 24 minutes). (Buckley 2011, PMID: 21491385) The authors of this study noted that many patients with severe carbon monoxide poisoning tend to have cognitive sequelae and sought to evaluate what, if any effect, hyperbaric oxygen therapy had on these cognitive sequelae.

What effect does hyperbaric oxygen have on the cognitive sequelae of carbon monoxide poisoning?

Patients were enrolled from emergency departments in Utah, Idaho, and Wyoming who referred 98 percent of all patients with known carbon monoxide poisoning to LDS Hospital in Salt Lake City from November 1992 through February 1999. A total of 460 patients were assessed, 332 deemed eligible and 152 enrolled in the trial.

Secondary outcomes: Neuropsychological test scores obtained after the third chamber session, including the testing performed six weeks after the carbon monoxide poisoning; self-reports of symptoms of carbon monoxide poisoning at six weeks; scores on the Geriatric Depression Scale, the Katz index of activities of daily living, and the SF-36 at two and six weeks; and the results on the neurologic examination after the third chamber session.

Inclusion: Patients were eligible for enrollment if they had a documented exposure to carbon monoxide (elevation of the carboxyhemoglobin level or the ambient carbon monoxide concentration) or an obvious exposure to carbon monoxide and if they had any of the following symptoms: loss of consciousness, confusion, headache, malaise, fatigue, forgetfulness, dizziness, visual disturbances, nausea, vomiting, cardiac ischemia, or metabolic acidosis (a calculated base excess lower than –2.0 mmol per liter or a lactate concentration higher than 2.5 mmol per liter). If the carboxyhemoglobin level was below 10 percent, the patient was eligible only if carbon monoxide poisoning was the only plausible diagnosis.

Exclusion: Patients were excluded if more than 24 hours had elapsed since the exposure to carbon monoxide had ended; if they were younger than 16 years of age; if they were moribund; if informed consent could not be obtained; or if they were pregnant. Additional patients chose not to enroll due to the cost, inconvenience, risk of complication or anxiety surrounding the treatment.

It appears that there is a reduction in long term cognitive sequelae with use of hyperbaric oxygen in patients with carbon monoxide poisoning.

While it is common practice in emergency medicine to treat carbon monoxide poisoning, the verdict is still out on whether or not there is true benefit for hyperbaric therapy over normobaric therapy. 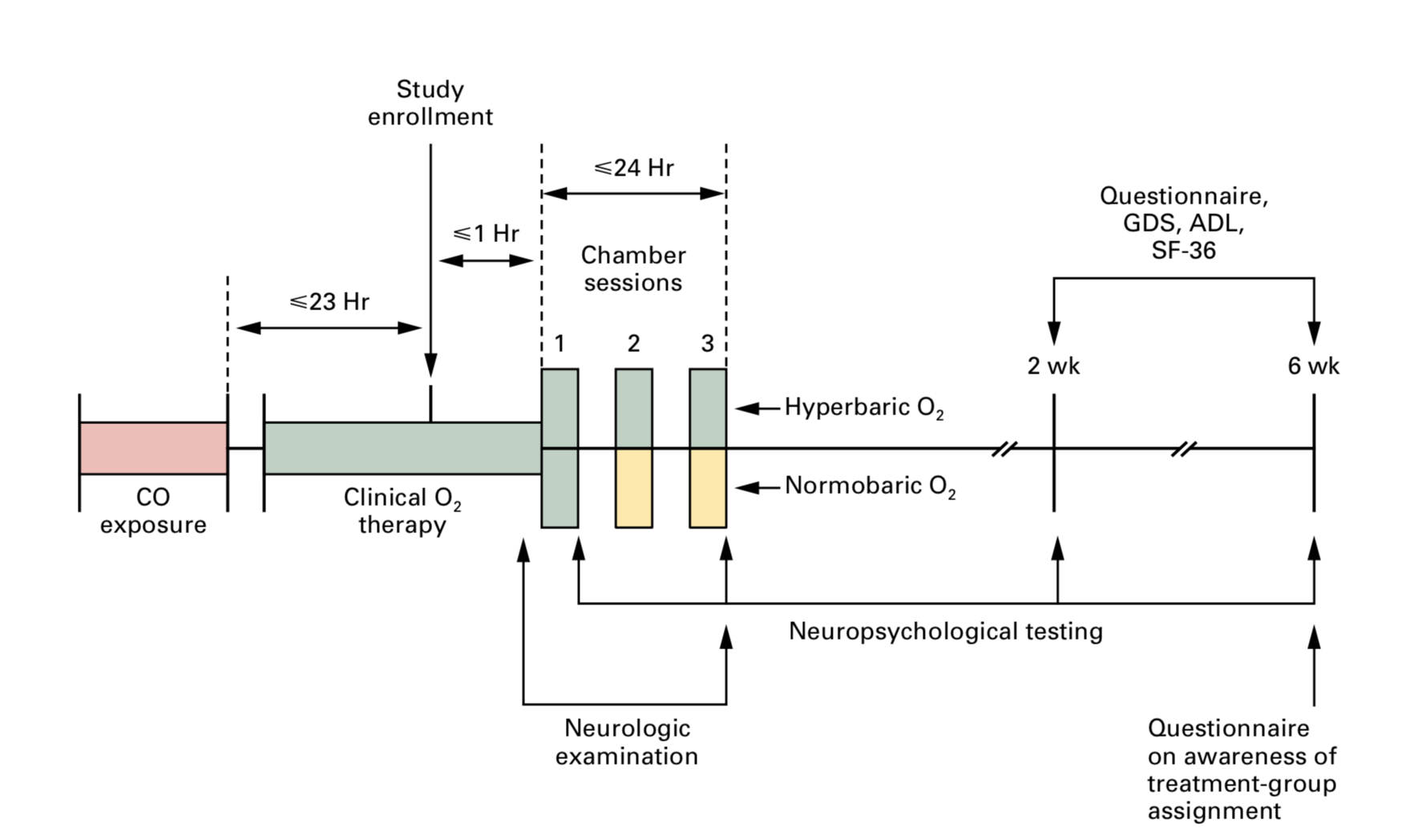 Figure caption from paper: Three chamber sessions were conducted, at intervals of 6 to 12 hours, within a 24-hour period. Neuropsychological testing included tests of general orientation, digit-span, Trail Making Parts A and B, digit–symbol, block design, and story recall. These tests were administered after the first and third chamber sessions and at two and six weeks. Green areas indicate the delivery of oxygen, and yellow areas the delivery of air. GDS denotes Geriatric Depression Scale, ADL the Katz index of activities of daily living, and SF-36 Medical Outcomes Study 36-Item Short-Form General Health Survey.