Diltiazem vs. Metoprolol for Rate Control in Atrial Fibrillation

Diltiazem vs. metoprolol for the management of atrial fibrillation or flutter with rapid ventricular rate in the emergency department J Emerg Med, 2015

Atrial fibrillation (AF) is a commonly encountered dysrhythmia in the Emergency Department (ED). Atrial flutter is less common but its management is very similar to that of AF. In patients with chronic AF or unknown time of onset and a rapid ventricular response (RVR), rate control and consideration and initiation of anticoagulation therapy are the standard ED approach. Both beta-blockers and calcium channel blockers are commonly used for rate control in the ED but it is unclear whether one of these agents is superior to the other as there is scant high-quality data on the topic (Demircan 2005).

Is diltiazem or metroprolol the more effective agent for rate control in AF with RVR in the ED? 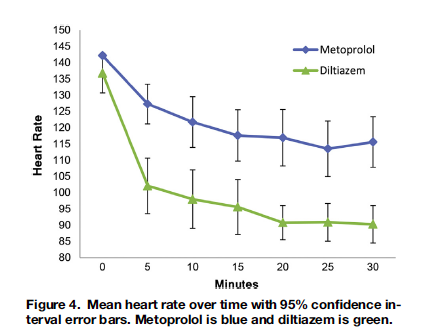 “Diltiazem was more effective in achieving rate control in ED patients with AFF and did so with no increased incidence of adverse effects.”

Diltiazem is non-inferior to metoprolol for rapid rate control in patients with AF and RVR. Larger, multicenter RDCTs are needed.

This study helps to defend what is the most common practice in the ED for patients with AF and RVR who require rate control.

The best available evidence demonstrates that diltiazem achieves rate control faster than metoprolol in patients with AF and RVR. Diltiazem should be considered the first line agent.