Immediate + Delayed ICH in Patients on Warfarin or Clopidogrel

Immediate and Delayed Traumatic Intracranial Hemorrhage in Patients With Head Trauma and Preinjury Warafarin or Clopidogrel Use Ann Emerg Med, 2012

Warfarin and clopidogrel are two commonly prescribed anticoagulant medications, and based on previous studies, patients taking either of these medications who suffer blunt head trauma are at an increased risk for traumatic intracranial hemorrhage (ICH). Additionally, there is concern that patients on these agents can have delayed traumatic ICH (traumatic ICH occurring within 2 weeks after an initially normal CT scan result in the absence of recurrent head trauma). Guidelines at many hospitals recommend routine head CT imaging and admission for neurologic observation in patients who suffer head trauma while taking warfarin. Evidence to inform guidelines for management of minor head trauma patients on clopidogrel is lacking. Despite the presence of hospital protocols for routine observation of both patient groups, there is little literature looking at the incidence of immediate and delayed traumatic ICH in patients taking warfarin or clopidogrel.

What is the incidence of immediate and delayed traumatic intracranial hemorrhage in patients with blunt head trauma who are receiving clopidogrel or warfarin?

Patients with known injuries transferred from other facilities, patients taking both warfarin and clopidogrel 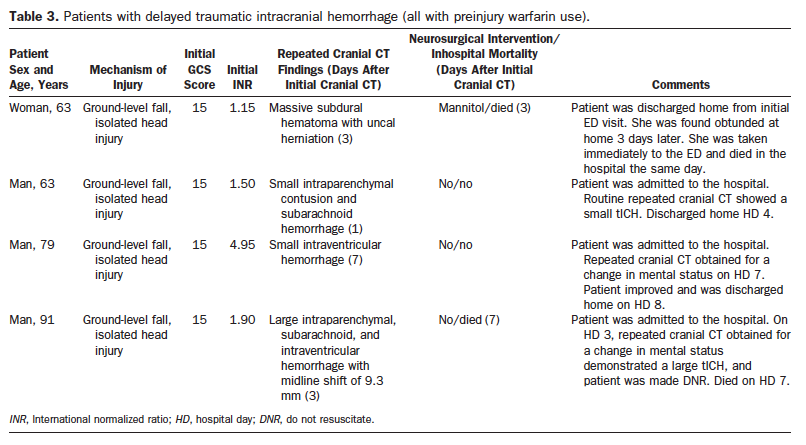 “ED patients with blunt head trauma and preinjury clopidogrel use have a significantly higher prevalence of immediate traumatic intracranial hemorrhage compared with those with preinjury warfarin use. Routine cranial CT imaging is generally indicated in patients with blunt head trauma who are receiving clopidogrel or warfarin, regardless of the clinical findings. The cumulative incidence of delayed traumatic intracranial hemorrhage is very low for both groups, suggesting that in patients with a normal cranial CT scan result, anticoagulation reversal is unnecessary and discharging them home from the ED may be reasonable.”

This study demonstrates that patients on either clopidogrel or warfarin are at significant risk of ICH after head injury. A NCHCT should be considered in all patients taking either warfarin or clopidogrel with any degree of head injury. The rate of delayed ICH, however, is extremely low. Based on the numbers in this paper, admitting all patients for observation would lead to the diagnosis of 1 delayed ICH for every 232 admissions.

While immediate ICH is common in patients on warfarin or clopidogrel who suffer any head trauma, delayed ICH is rare. Routine observation and repeat imaging in patients with an initial negative NCHCT has an extremely low yield.