68 yo F sent to ED by PMD for abnormal lab values. Patient states she had a prolonged episode of epistaxis lasting about one hour 7 days ago and subsequently developed exertional dyspnea and increased lower extremity swelling. Patient endorses decreased exercise tolerance and is unable to walk more than one block now. Patient states she was unable to sleep last night as she was unable to laydown due to difficulty breathing. Patient denies chest pain, melena, bright-red-blood-per-rectum. Patient states she had taken furosemide in the past, but was stopped due to kidney injury from concurrently taking gout medication.  Patient saw her PMD yesterday, had labs drawn and was prescribed furosemide again, but states she has not yet started taking it.
Patient also states she noted her blood pressure to be intermittently very low with sBP in 70s 3 days ago. Patient also feels her blood pressure is less than it normally is today. States her sBP is usually 160-170s.

Point-of-care ultrasonography has become an integral tool for emergency physicians to assess patients in extremis, especially when classic physical exam findings such as Beck’s triad of JVD, muffled heart sounds and hypotension are rarely present3,8,11.  However, most patients with tamponade will manifest either frank or relative hypotension7. So when evaluating patients with a decreased blood pressure, tamponade should always be part of the differential.

Bedside echocardiography for the evaluation of pericardial effusion has been accepted in the scope of practice for emergency physicians and is supported by ACEP (American College of Emergency Physicians) and ASE (American Society of Echocardiography)3,11. Bedside echocardiography becomes especially helpful in the undifferentiated dyspneic patient as up to 10% of patients with undifferentiated dyspnea in the Emergency Department have been found to have underlying pericardial effusions2.

In cardiac tamponade, increased pressure in the pericardial sac from accumulation of fluid deters the lower pressure system of the heart to fill during diastole causing eventual right atrial and ventricular collapse. The earliest and most sensitive sign of cardiac tamponade is right atrial collapse4.  Right ventricular collapse is very specific for tamponade physiology, but less sensitive11. A plethoric IVC with no respiratory variation can also be found in tamponade though this is non-specific and can occur in other conditions with elevated right heart pressure. Importantly, if the patient has chronic pulmonary hypertension with chronically elevated right heart pressures, right atrial or ventricular collapse may only be a very late manifestation11. 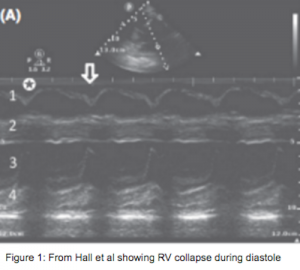 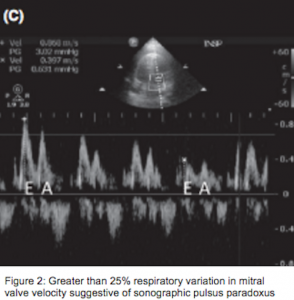 Sonographic pulsus paradoxus can be documented in the apical-four chamber view with pulsed-wave Doppler. Paradoxical decrease in velocity of blood flow through the mitral valve greater than 25% during inspiration will be seen in tamponade physiology1-2 (Figure 2).

Di was raised in Portlandia, then transplanted to New York for medical school and now residency. She enjoys exploring the city especially the food scene, playing with her dogs and seeking out green spaces. Her academic interests include ultrasound and education.